How Do You Like to Drink Your Cup of Tea Every Day? | Billi UK
We use cookies on this website to enhance your user experience. We also use cookies to determine your preferences and deliver advertising to you. By continuing to browse this website you are agreeing to our use of cookies. For more information on the types of cookies we use and how to disable them see our Privacy Policy.
Billi UK > News > Health News & Information > How Do You Drink Your Tea Every Day?

How Do You Drink Your Tea Every Day?

How Do You Like Your Tea in the Morning?

The drinking of tea is a truly British tradition, we love it so much that we drink around 60 billion cups of it a year, according to the Tea and Infusions Organisation. It is obvious that tea is our way of life, from the morning brew to treasured tea breaks in the office, to the afternoon tea at grandmas. We Brits love a good cup of tea at any time of the day.

However, what always plays on everyone’s minds is, is there such a thing as the perfect cuppa? How you have your cup of tea is a completely personal choice. Some have it black, some have it with lots of milk and sugar, and some even have it with lemon. Yet, according to the Telegraph, approximately 50 per cent of the British population would prefer a Yorkshire tea brew of a mid-brown colour all on its own.

Premier Inn showed six images of a brewed tea and asked a survey of 1,000 tea drinkers in the UK how they preferred their tea colour. The results show that the nations favourite brew strength was also revealed as number three on the tea colour chart below. This indicates that our personal preferences are all generally quite similar. 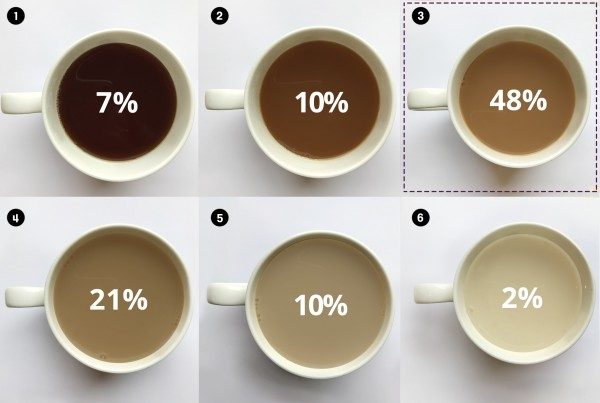 A poll from the Telegraph shows that indeed, 73% of the nation agrees that the best way to brew the perfect cuppa is water over the teabag first, followed by a dash of milk. The best way to brew a splendid cup of tea is to pop the tea bag into your mug of choice. Add boiling water to it and stir briefly. To bring out the flavours and essential antioxidants, leave your tea to brew for approximately three to four minutes. Once brewed, squeeze the tea bag lightly and remove it from your mug. Complete with added milk or sugar to achieve your desired taste.

Brew the perfect cuppa straight from our Billi Taps. There will be no need to wait for the kettle with our range of Sahara taps. With its innovative technology, the Billi Sahara dispenses more cups of boiling water instantly than any tap of its kind on the market.

Rest assured! However you make your tea, your brew will be perfect with the help of our taps.